I recently tried out Hulu for the first time. Though it falls a bit behind competitor Netflix in terms of name recognition, it has a decently wide variety of shows, especially ones normally locked to mainstream TV networks. However, I have a major problem with it that I want to publicize. Hulu deceptively advertises the service works in all modern web browsers, which is true, but is limited to a painfully blurry 396p resolution.

When I first signed up for Hulu, I naturally went to hulu.com in my primary web browser, Google Chrome, on my Windows computer. I understand some more niche browsers may lack the necessary components to play Hulu's DRM-locked content, but Chrome is one of the most, if not the most, popular PC browsers. And Hulu lists it in their System Recommendations.

Once I clicked to watch a show, I quickly noticed that it was rather blurry. I initially ignored it, thinking it would fix itself once the connection buffered enough or something, even though I can generally stream HD video without issue. The problem persisted a few minutes later and was tough to ignore- it really was a lot more pixelated than I expected. I also tried different shows to no avail. I looked in quality settings, but there were only two choices, "Best Available" and "Data Saver", and I was already on the former.

To confirm it wasn't just my eyes, I discovered a nice tool in Google Chrome: "chrome://media-internals". It shows some technical details about open video players, including the resolution. Sure enough, it seemed that Hulu was using a 704x396 resolution. 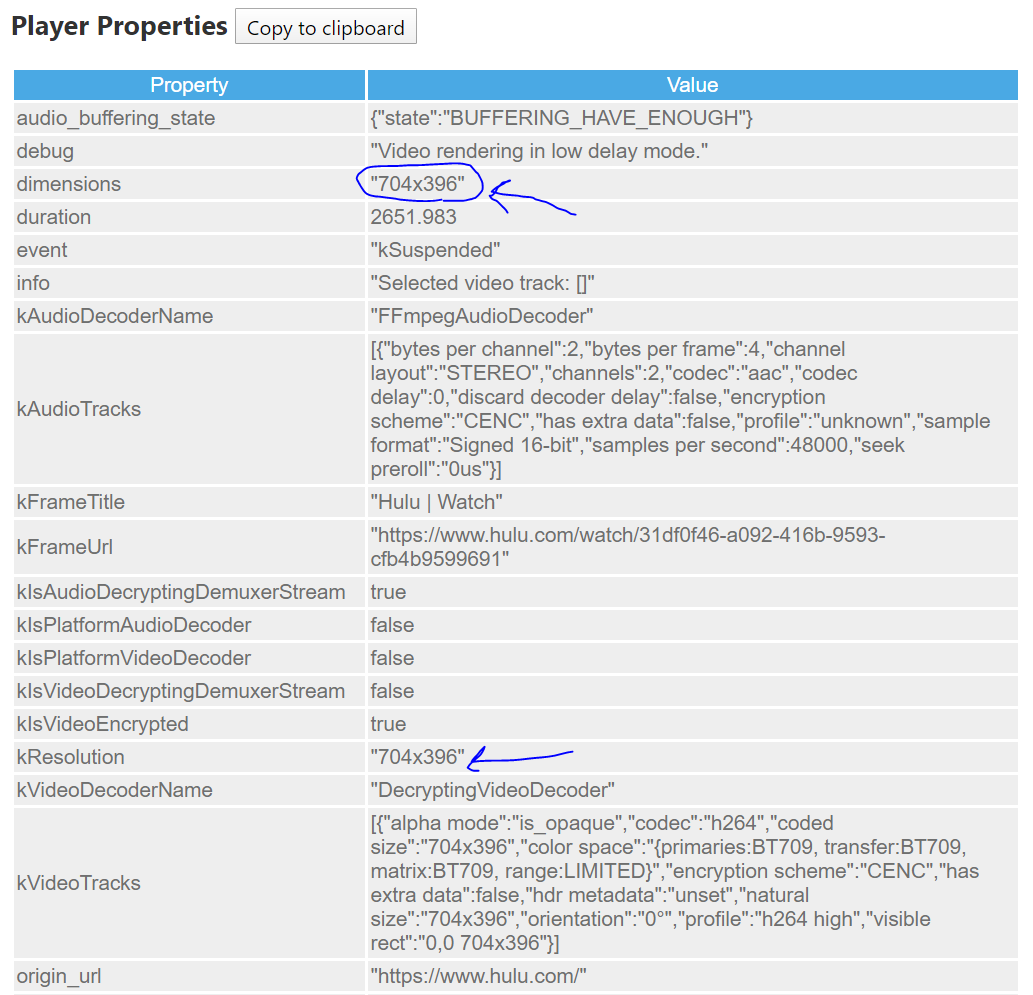 Now, this 396p resolution has 68% the number of pixels as 480p, which is generally considered "Standard Definition". So Hulu was streaming in sub-SD quality, far from the 1080p HD quality I expected from Hulu.

I soon discovered Hulu had a dedicated app for Windows 10 users, available to download from the Microsoft Store. Once I installed it and signed in, the quality was notably better. (It looked like 720p to my eye, which is still a little low, but I'll certainly stop complaining at this point.) There was also no problem at all when streaming to a smart TV that included the Hulu app, which looked like a crispy 1080p to me.

I also tried a range of other browsers. Hulu continued to not work in HD in Firefox and in Chrome on a Mac. But it did show up in HD when opened in Microsoft Edge on Windows, or Safari on Mac. Is it a coincidence that it only worked in the browsers that come with each OS? Maybe.

It does seem that this issue is not limited to myself- there are many complaints on Reddit. They have been coming for over 8 months now, so it's hard to argue this is a temporary issue Hulu is working diligently to fix.

Ok, so maybe you need to download a specific app or maybe open a different browser to access Hulu properly. What's the big deal?

My first major annoyance is that Hulu hides these details. If it came up with some kind of warning when you try to watch the severely degraded content in Chrome that you should instead install the official app, I would respect it. Instead, Hulu is deceptively advertising that it can be watched in any browser without setup. Some people might not know what to do about the lower quality and just put up with it. They'll lose out taking advantage of the subscription they paid for, and it might be bad for Hulu as well, as people will start wondering why it is so blurry compared to other services. You don't need a trained eye to spot 396p.

But the second huge issue is, what about Linux users? They don't have an official Hulu app, Microsoft Edge, or Apple Safari. (The same can be said for Chromebook users.) So they are just totally out of luck and cannot watch Hulu in a reasonable resolution on their computers. Now, I understand Linux comprises a minority of PC users, but it has many advantages over Windows, including being free of charge and more efficient on older hardware.

I recently tried bringing an outdated desktop PC from 2007 into the modern world by hooking it up to a TV to give it smart features. I started by installing Linux for the aforementioned reasons. Fast forward, and I had no other choice but to start over and install Windows instead if I wanted Hulu to work. I get that streaming sticks that support Hulu can be cheap, but it was still an annoying hole in my plan to rig a single computer that can handle everything from streaming services to home videos.

While I would like to see Hulu move forward and re-enable HD streaming across browsers, perhaps they want to move to a closed ecosystem that only works through official apps on Windows or smart TV devices. In this latter case, I ask that they can at least own up to this fact and stop deceptively providing sub-SD 396p resolution to many unknowing users.

There's one other glitch in Hulu that I hope they can fix. On my Samsung UHD TV, Hulu always cuts out for an advertisement about a second too early, causing us to often miss the punchline. It's one of those things that's minor but gets increasingly annoying after a while. The issue is only on the Samsung TV. Now while this is barely related to the above issue, it is related because if Hulu really wants us to be using its "official" clients instead of web browsers, it should at least make sure they all work smoothly.